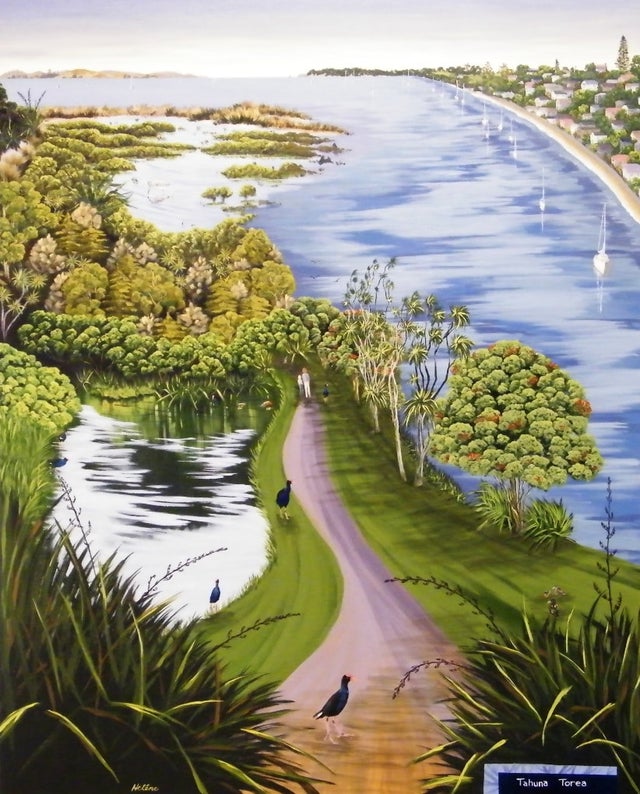 This Artwork was sold through Kate Casey at the Casey Trust (in conjunction with Dunbar Sloane) New Zealand Emerging Artists Exhibition in May 2010.

This artwork also won the "People's Choice" Award in the "Estuary Artworks 2010" exhibition.

The exhibition was run by the Uxbridge Creative Centre and sponsored by Auckland Regional Council and Manukau City Council.

The competition was open to all artists nationally and was aimed to raise the profile of the Tamaki Estuary and to encourage the community to protect the estuary from all forms of pollution. Artists were also encouraged to show this in their entry.

After walking around the area of "Tahuna Torea" which is the Glendowie area of the estuary and taking many photographs, I decided to paint this picture from a 'feeling' I got from the area and used the photographs for reference.

I wanted to include as much information as possible into the painting and I would classify it as a 'representational' piece. (It's a bird's eye view!)

The word 'Mana' in the title not only means just the 'life' of the land, but also the 'life-giving', 'love/potential' of the land.

Click here to read an editorial about Helene Henare and her Award Winning art work. Editorial written by Kristina Rapley and published by Eastern Courier, 2010.

Sold out
Add to Cart